Letters to a Young Mathematician by Ian Stewart 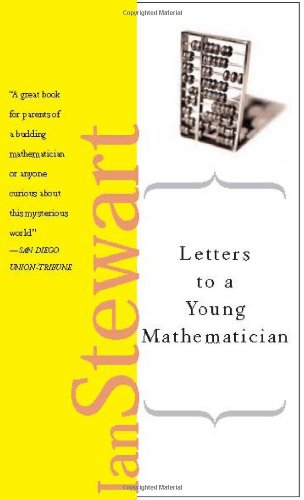 <p>From Publishers Weekly</p> <p> Starred Review. This new entry in the Art of Mentoring series takes the form of letters from a fictitious mathematician to his niece. The letters span a period of 20 years, from the time the niece is thinking about studying mathematics in high school through the early years of her academic career. The format works wonderfully to introduce readers to the basics of the discipline of mathematics while providing a sense of what mathematicians actually do. Throughout, the prolific and talented Stewart (Does God Play Dice?), a British mathematician, entertains while educating. He explains how mathematics is so much more than mere calculations and how it's used in almost every facet of our lives. He also discusses the beauty mathematicians can find in the natural world, demonstrating that a focus on numbers and patterns can enhance rather than detract from an aesthetic appreciation of the environment. Stewart also does a superb job of examining the nature and value of both applied research and pure research, which, he shows, are not nearly as disparate as many think. Although the book must be read by anyone thinking about a career in mathematics, others simply interested in learning about the field and how mathematicians think will find it compelling reading. (Apr. 17) Copyright &copy; Reed Business Information, a division of Reed Elsevier Inc. All rights reserved.</p> <p> Review</p> <p> "No-one could have written better on what being a mathematician is all about, and on what it takes to become one. A true gem." Mario Livio, author of The Golden Ratio." </p>